The Law Of Treaties 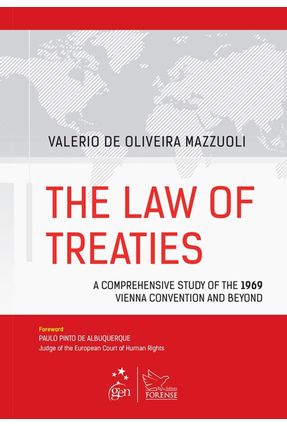 The extraordinary growth in the number of international treaties concluded in recent decades has awakened the interest in the study of the Law of Treaties throughout the world. Nevertheless, many of the works that have been recently published do not reach a satisfactory degree of detail, leaving the academic readership with no answer concerning most of the practical problems that the contemporary law of treaties poses.This book, written by one of the most renowned Brazilian internationalists, deepens the study of the law of treaties by offering specific solutions to current legal problems. It provides a high-level theoretical and practical approach, touching upon all major current issues of the law of treaties. It is noteworthy that each subject-matter discussed in this work was thoroughly analyzed and supported by a rigorous methodology, including the use of the most accurate terminology and a well-reasoned explanation of each of the issues addressed in accordance with  the most authoritative legal scholarly writings. This work is also a helpful reference for governmental and diplomatic officials, legal practitioners and the legal academia at large in trying to understand how international acts are negotiated and adopted, what the rules are for the formulation of reservations and introduction of amendments to conventional texts, how a State is definitely deemed to be bound by an international act or treaty, which the effects are of a treaty that came into force and how treaties should be applied at the international level, etc."I am most impressed by your work. It provides for a full treatment of the law of treaties. I particularly appreciated your many nuances as to the interpretation of the Vienna Convention (for example in respect of the rules on interpretation in Articles 31-33 VCT, on which I have specialised). I was also delighted how you were inspired by my Commentary. I shall certainly make express reference to it in my classes to my students. Also, it will be of great assistance to me in my research on the law of treaties in international law. Your book will have a special place in my library!" Villiger Mark - Judge of the European Court of Human Rights"I am very impressed by the level of analysis and research." Malgosia Fitzmaurice - Queen Mary Investigator"Deseo agradecer su atención, así como por la revisión y ampliación de sus contenidos respecto de la primera edición. Su obra es, sin duda, un referente obligado en la literatura iusinternacionalista en lengua portuguesa, por su dimensión, actualidad y cuidado en la información doctrinal y documental."Prof. Antônio Remiro Brotóns - especialista em Direito dos Tratados da EspanhaAcompanhe as nossas publicações, cadastre-se e receba as informações por e-mail (Clique aqui!)
BAIXAR
LEIA ONLINE

how treaties addresses particular issues such as the Law of the Sea or extradition measures. The Law of Treaties deals with how treaties come into being and how to process of making and administering treaties is regulated.