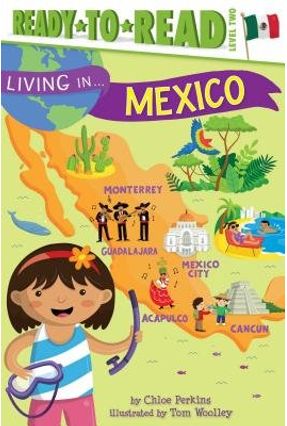 Discover what it's like to grow up in Mexico with this fascinating, nonfiction Level 2 Ready-to-Read, part of a new series all about kids just like you in countries around the world! Hola! My name is Rosa, and I'm a kid just like you living in Mexico. Mexico is a country filled with beautiful art, incredible ancient ruins, and gorgeous beaches, rainforests, and deserts! Have you ever wondered what Mexico is like? Come along with me to find out! Each book in our new Living in... series is narrated by a kid growing up in their home country and is filled with fresh, modern illustrations as well as loads of history, geography, and cultural goodies that fit perfectly into Common Core standards. Join kids from all over the world on a globe-trotting adventure with the Living in... series--sure to be a hit with children, parents, educators, and librarians alike!
BAIXAR
LEIA ONLINE

Its blue skies, palm trees, colonial architecture and tropical climate will seduce you, and the remarkably affordable cost of living and peaceful lifestyle will entice you to stay. With extensive infrastructure, safe investment, ease of access, an established expatriate community,... But in Mexico, there are so many top options for living and investing on the table that it's hard to pick a winner.